NSSC Sponsorship. Where our money comes from and where it goes to.

All profits from the 50/50 Draw held at Coventry Speedway were donated directly to the Coventry Bees and Coventry Storm riders. This fundraising is completely separate from Club events and ceased at the end of the 2016 season. Please find more information here

All profits raised from Club events are used to sponsor the British Young Lions.

Memorabilia donated by Coventry Racing Club Ltd in November 2016 was sold in order to raise funds to help support the British Young Lions.

For more information on British Youth Speedway & the Young Lions, take a look at their website

Sponsorship totals under the current committee. (since 2004)

A grand total of £12,700 from Club funds donated to Juniors and Storm riders appearing in 2nd Half events at Brandon.

Currently proceeds from NSSC's events are used to help Neil Vatcher and the Young Lions so a very big thank you to everybody who supports these events and especially those riders, team managers, promoters, referees and the media who give up their time to entertain us.

We have also had a windfall from the sale of memorabilia rescued from Brandon and donated to the NSSC by Coventry Motor Speedway Ltd. 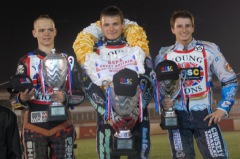 British U-19 Championship - sponsored by the NSSC 2014

The Championship was sponsored by the NSSC and Treasurer Russell Bott presented the trophies to second and third placed riders.